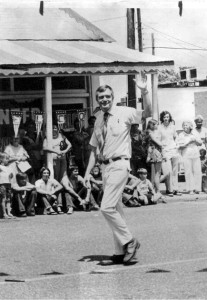 Jeb Bush is all over the national press now and, for me, his presidential campaign conjures up memories of my years of research into Lawton Chiles for my book, Walkin’ Lawton.

I wrote an entire chapter on the 1994 Bush-Chiles gubernatorial race–the campaign that most pundits thought would send Jeb into the national spotlight and onto the fast track to the White House. In fact, Chiles fought hard and fought smart and won reelection. Here is an excerpt from the book where I summarize the election outcome:

In one of Florida’s closest political contests, the governor defeated Jeb Bush by about 64,000 votes, 50 percent to 49 percent. Both candidates garnered over two million votes. Governor Chiles won in what had become the Democratic ‘Big Three’ jurisdictions: Miami-Dade, Broward, and Palm Beach. The election put conventional wisdom about the state to the ultimate test. It taught a good rule of thumb: If a Democrat can carry Dixie and Miami-Dade County, they win the state. Dixie County–a swampy jurisdiction full of snakes, bald cypress, and saw palmetto, at the mouth of the Sewannee River–supported Governor Chiles. So did Miami, center of international commerce and culture.