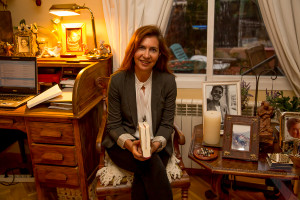 I’m sharing this post from www.johndospassos.com. I’m thinking a lot this weekend about cultural diplomacy and the role that literature can play in uniting diverse peoples around the world. In this violent age, I think about the fellowship, the civility, within the Dos Passos scholarship network. Mostly, his work draws thoughtful, tolerant, patient, wise people. I learn from them constantly. I give much to the legacy and it gives much in return. I think granddad would love that. Enjoy!

Rosa teaches Translation and Intercultural Communication at Universidad Alfonso X el Sabio and at the ILMyT (Instituto de Lenguas Modernas y Traductores) of the Universidad Complutense de Madrid. She holds a postgraduate degree in British and North American Literature and a BA in English Language and Literature. She has been a certified/sworn translator by appointment of the Spanish authorities (Ministerio de Asuntos Exteriores) since 1995.

John Dos Passos Coggin: How is your PhD dissertation going? How is research and composition?

Rosa Bautista: I am reaching the finish line, enjoying the process. Drafting the final pages and hopefully soon ready for final editing!

JDPC: Your PhD focuses on Manhattan Transfer. What about that novel interests you the most? Why do you think it has such staying power in Spain and the rest of the world?

RB: Well, initially I chose to work on Manhattan Transfer with an interest in finding out why it is so popular in Spain as compared to other Dos Passos’s works, such as his works of Spanish inspiration or the U.S.A trilogy, for example. In the course of my research I have found that other factors beyond the purely literary ones must be considered in order to find reasons for that centrality, and that its “staying power;” in the case of Spain, is mainly due to historical and political reasons. Apart from that, Manhattan Transfer is a fascinating narrative experiment, full of poetry at times, and very interesting as social history too. Very challenging from a translating point of view.

RB: My paper dealt with the influence of politics in the Spanish construction of John Dos Passos. Quite surprisingly, the same reasons that made him lose popularity in the U.S. after his political disillusionment during the Spanish Civil War (1936-39),
have contributed to keeping Dos Passos and Manhattan Transfer as an important part of Spain’s recent cultural history.
The First Biennial Conference in Chattanooga was a great opportunity to learn and to meet other Dos Passos scholars. I was impressed by the generosity of the John Dos Passos Society members and felt very welcome as the only representative from Spain at the Conference.

JDPC: What are your goals for the 2016 Dos Passos Conference in Madrid?

RB: We hope to have a truly international conference with Dos Passos scholars from even more countries than those represented in Chattanooga in 2014, and with more participants if possible! The JDPS board members, Edward Eason as conference organizer and myself on-site in Madrid have been working for the last few months with just one idea in mind: to make the Conference a complete success in terms of participation and quality. I think we are extremely lucky to have you participating in the round table with Sonia Tercero Ramiro-the director of the documentary film Robles, Duelo al Sol– and Ignacio Martínez de Pisón -author of To Bury the Dead and winner of the Spanish “Premio Nacional de Narrativa 2015” literary award. As host, I would like to make everybody feel welcome in Madrid, so that they go back home with the feeling that attending the Second Biennial Conference was really worth it!

JDPC: What are Dos Passos’ most important writings about Spain?

RB: My favorite ones are the collection of non-fictional articles included in Journeys Between Wars dealing with the Spanish Second Republic and the Civil War, and the autobiographical memories in The Best Times. Although Rosinante to the Road Again seems to be the one that has attracted the most scholarly attention so far, I find the poems in A Pushcart at the Curb and the novel Adventures of a Young Man are extremely interesting from a research point of view, and hope to work on those too in the future.

JDPC: Much of John Dos Passos’ relationship with Spain was driven by the Civil War. In brief, what should Americans know about the Civil War’s place in Spanish history?

RB: It was a very traumatic experience for the civil population as a whole. The origin of the outbreak of the Spanish Civil War was a tragic combination of political instability, social tensions due to huge inequalities, hunger and underdevelopment in part of the population and abuse of power by the privileged classes. The young Second Republic -after the renunciation of King Alfonso XIII in 1931- was very fragile. Some saw in Spain the opportunity to develop and put into practice the ideologies that were fast spreading across Europe and that were the prelude to the Second World War. When the war broke out in July 1936 after a military coup and the opposition by the Republican government, many were forced to fight against their will. Families were divided either because they supported opposite sides, or because their members happened to be in geographical areas separated by the front line, as was the case in my own family.

Although Spain’s transition to democracy and parliamentary monarchy after Franco’s death in 1975 meant the reconciliation of those who represented the confronting ideologies during the war, the Spanish Civil War is still present in Spanish politics today and for some minorities, it is still an open wound. Personally, I think it is important to let the younger generations know more about the historical facts, as well as about the personal stories of the protagonists, so that it never happens again. I like Dos Passos’s quote on this: “Understanding the personal histories of a few of the men women and children really involved would I think free our minds somewhat from the black is black and white is white obsessions of partisanship” (Ludington The 14th Chronicle 527).

JDPC: What do you enjoy most about being a translator?

RB: In the case of literary translation, I enjoy the challenge of an [almost] impossible task. Translating requires a deeper type of reading; you should have a full understanding of the source text which involves not only language skills, but thorough documentation, careful checks, and lots of creative thinking and inspiration too!

JDPC: What are the challenges of translating Manhattan Transfer into Spanish?

RB: Everything is a challenge in the translation of MT! I’d say that the dialogues with the different characters’ dialects and the experimental narrative technique are extremely difficult elements in translation. Things like biblical allusions or the inclusion of real life events to mark time in the novel are also challenging from a translating point of view.

JDPC: What was the last article or book by Dos Passos that you read and why?

RB: I keep reading MT again and again, and also The Best Times. More recently, I’ve reread the collection of essays and articles in Journeys Between Wars.

JDPC: What new (published this year or last year) book do you recommend and why?

RB: Ignacio Martínez de Pisón’s award-winning La Buena Reputación. I really enjoyed it, and most critics think it’s his best novel to date. Not sure if it is already available in English, but I am sure that if it’s not, it will soon be!